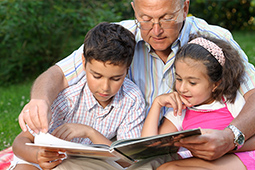 Jesus said to his disciples:  “Do not store up for yourselves treasures on earth, where moth and decay destroy, and thieves break in and steal.”
What do you focus on?  What are you storing up for yourself?  The Lord encourages us today to focus on the things that matter the most; that is, where moth and decay can never destroy and thieves can never steal.
Today, I would like to focus on three things:  faith, family and friends.
A few years ago, some parents asked me to give a series of talks on Fatherhood.  To prepare for it, I read some great books by some wonderful Christian authors.  One book, entitled “King Me”, by Steve Farrar, became very useful for my talks. It was filled with great (and true) stories that anyone could relate to.  The very first story in the book struck a chord with me and with my audience of men.
He was an evangelist who preached the Word with the Holy Spirit’s authority and power.  He was the most sought-after evangelist in his denomination.  If you wanted him to preach in your church, you had to get in line and wait at least four years…
The numerous invitations were always a pull away from his family.  But he and his wife had settled on a formula that worked well…The formula was simple:  He would go out and preach for two weeks and then come home for two weeks…Everything was working and God was blessing.  His marriage was strong.  His boy, now a teenager, was doing well in school and athletics.  His ministry was taking off like a rocket.
And then the phone rang…It was his wife…She had had enough with their sixteen-year-old son.  She couldn’t do it anymore.  He was becoming increasingly rebellious.  She was losing all authority.  She told her husband, “I need you.”
The boy’s father arrived home and within days a For Sale sign was in the front yard.  He cancelled all future speaking engagements and accepted the pastorate of a small church in another state…Until his son graduated from high school and went off to college, he pastured the small church and mentored his growing son.
With his son headed off to college, he was ready to return to evangelism.  But in those few years away from the preaching circuit, many of the older pastors had retired and been replaced by younger men.  He was no longer in demand…The decision to go home had come at a great price.
But because he had made the tough decision and went home to focus on his family, years later his son would begin a ministry known as Focus on the Family.
James Dobson is the product of his father, James Dobson Sr.
Although Father’s Day has passed, we should not forget what a treasure our family and friends are in our lives.
Faith, Family and friends.  These three are our greatest treasures.  To be blessed with them is worth more than all the gold and silver.  I really believe this.  They are the source of so much of our joy.  They are also the cause of so much pain and suffering; which only reaffirms what I just said, for if neither really mattered to us, then neither could ever produce so much distress in our lives!
Faith, Family and friends are our greatest investments and natural resources.  They are well worth our time and effort.  They are our roots and wings.  They give us a sense of stability and security in a cold, unforgiving and ever changing (and passing) world (check out 2Cor 11:21-30 to know what I mean).
Without them we would be more than lost.  We would be irrelevant.
God bless you all!
Tweet
Tagged under: DOLOR, DUIS, PLACERAT, TRISTIQUE